The Highs and Lows

Well... The river was low but spirits were high. Myself, Gary, Dean, Clyde and Hazen were eager to give the Gander River a run from the Exploits Highway to Gander Lake. Brian, the Old Master, who new the water would be low, opted out :) 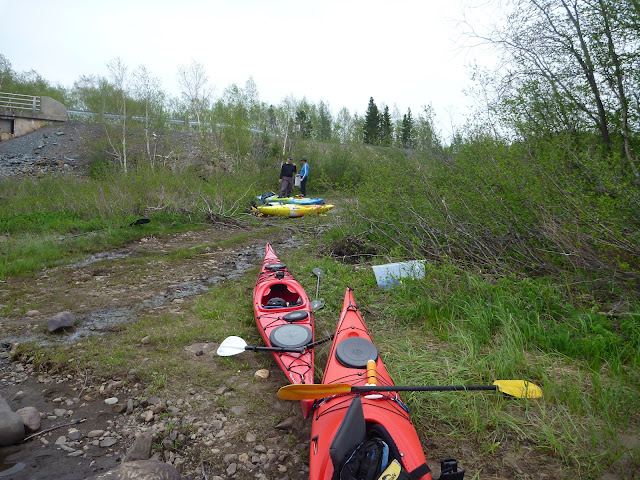 Gary and Hazen were doing the shuttle run with the cars while Dean , Clyde and I waited ......and waited.... and waited..... 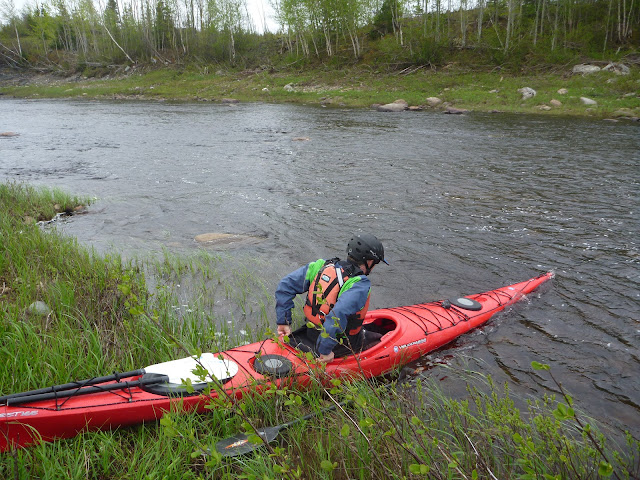 It was after 5 when we finally got in the water.
The first night, we found a pretty sheltered field to camp. It rained, but we were happy cooking under Dean's yellow tarp. 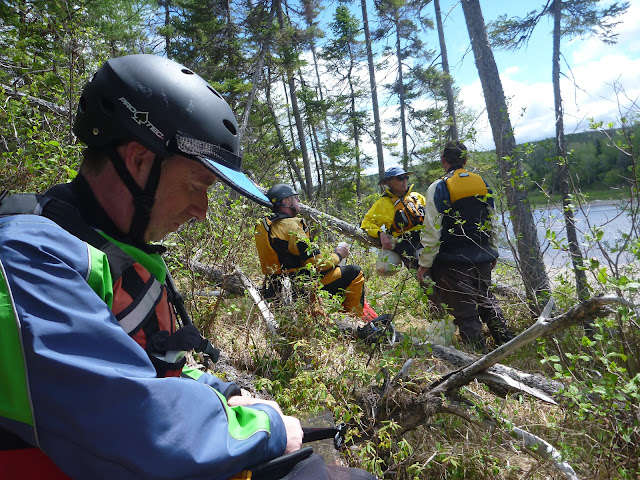 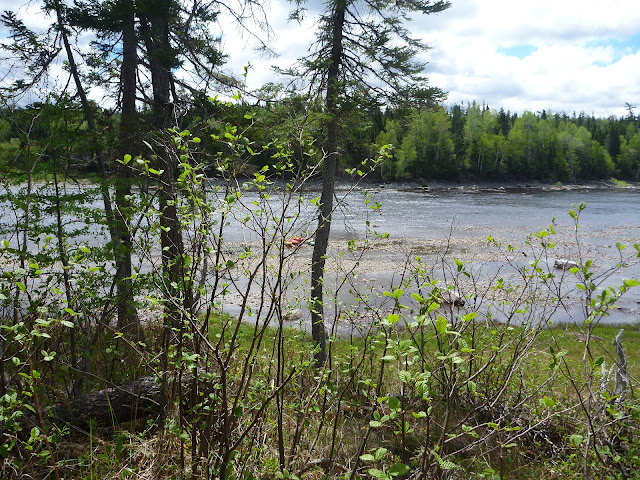 The view from our lunch perch. 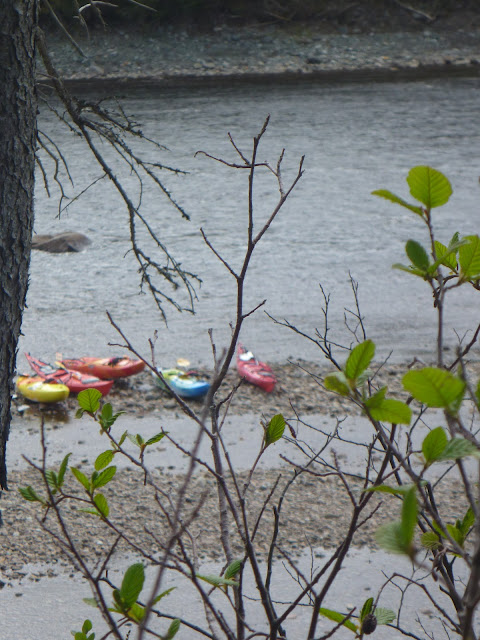 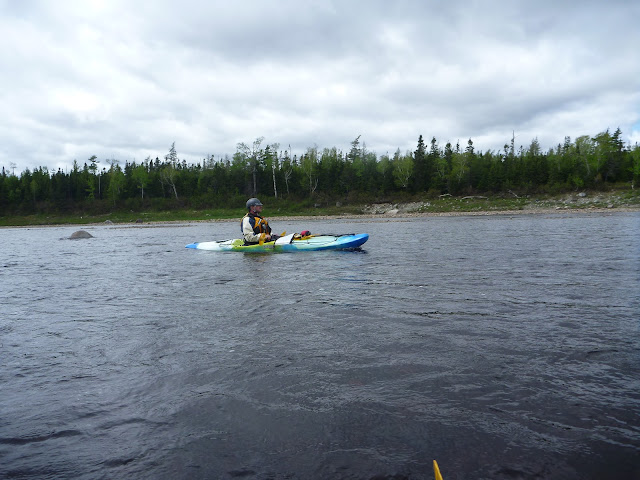 Here  Dean is struggling with  few things:
1) He couldn't keep his boat straight,
2) He was having shoulder issues
3) He was tired of scraping the rocks and dragging the boat through shallow water when Gary seemed to just glide through anything!
4)  He fell in the water when he was dragging his boat and filled his paddle pants .
5 ) There was no elastic left in his longjohns and they were sagging down to his knees
6) He asked for a hug for once! 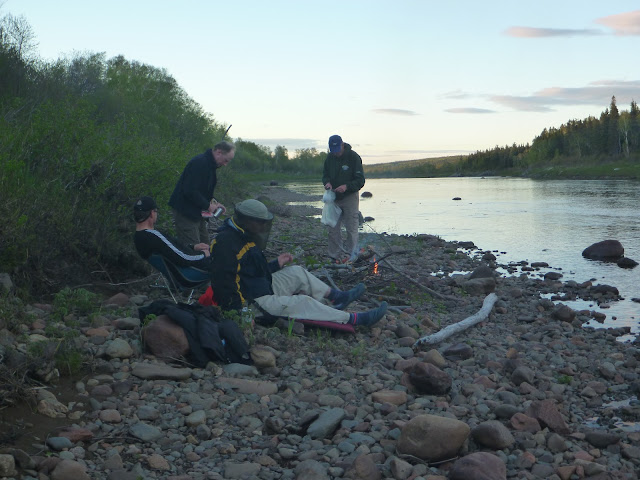 Unlike winter kayaking, flies were an issue..., The guys are trying to get the fire started to smoke them out. 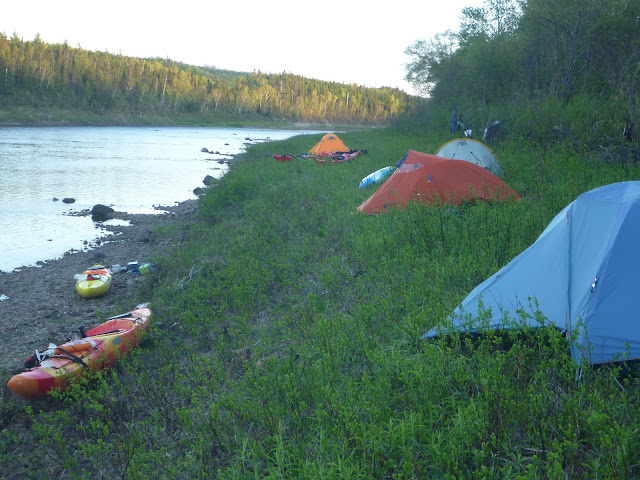 Tucked in out of the wind for night #2 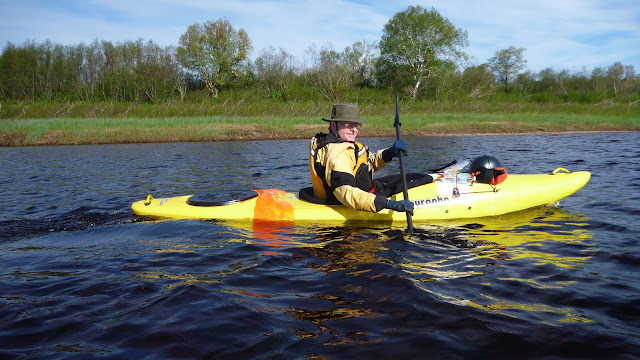 Clyde gliding happily with the current with no clue that his truck might be confiscated. It was parked at Hazen's friend's cabin  for the shuttle and they thought someone was breaking into their cabin. They called the RNC who said it was a stolen vehicle. It was almost towed into custody when they realized that they had the licence plate # wrong! 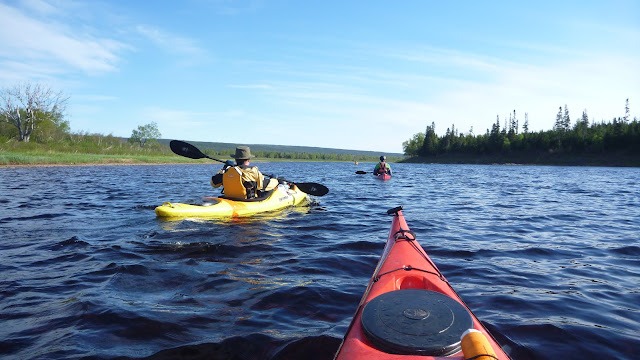 Just a few Kms to go of the 50 in total.... Of course there are no pix of the 3 rapids sections. No time to get the camera out for those parts! 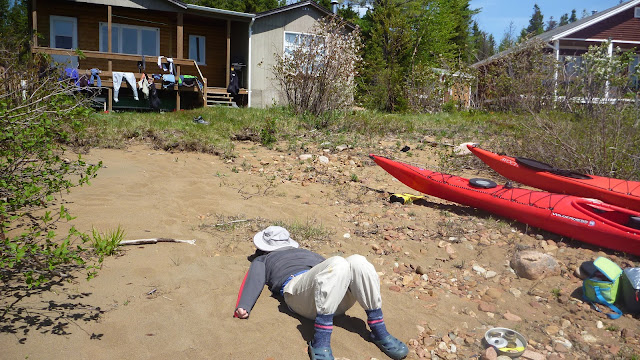 Finally at Gander Lake, me and Gary waited at Hazen's friend's cabin for the shuttle this time. Plans for a nice picnic and rest was thwarted by flies. We  tried to beat the heat and the flies with a swim. The water was freezing... but Gary was going in anyway! 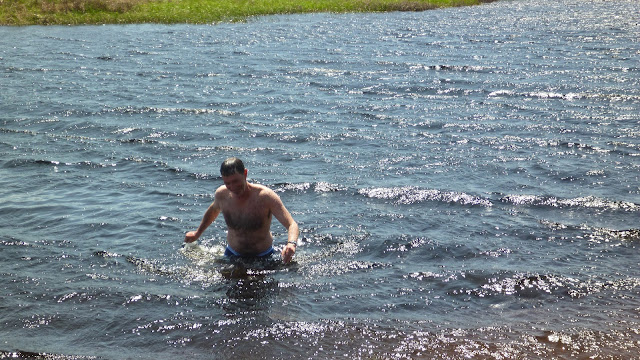 After about 1 1/2 hours, the guys returned from shuttling the vehicles, and Hazen nearly backed Gary's car into the ditch. We found some local guys to help tow it out with coach Dean directing the show. This was bad, but could have been a lot worse!! Good thing no one was in a rush to get back to town!
Gary says Hazen will have to take the keys from his cold dead hands before he gets to drive his new Subaru !!! I think Clyde was feeling the same way after Hazen also broke the air conditioning in his truck! This was not a lucky trip for Hazen!!! At least Dean got to change into underwear with elastic in them! 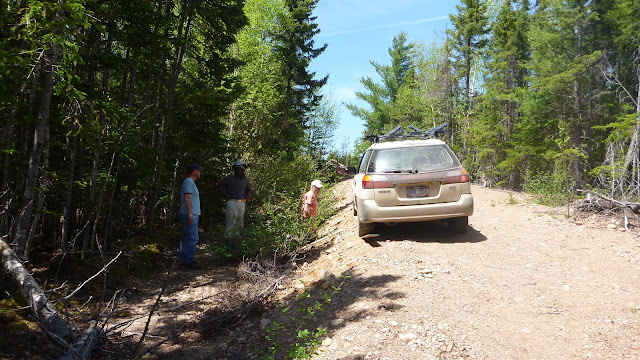 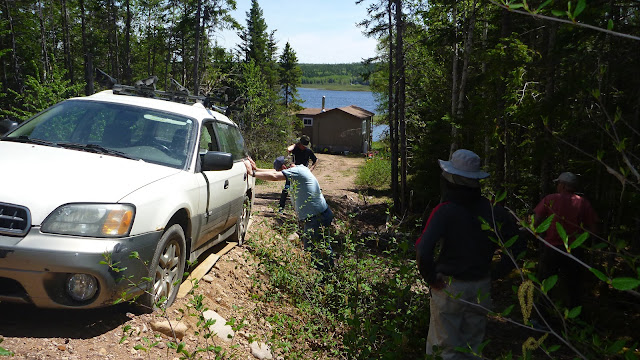 Dean holding the car up 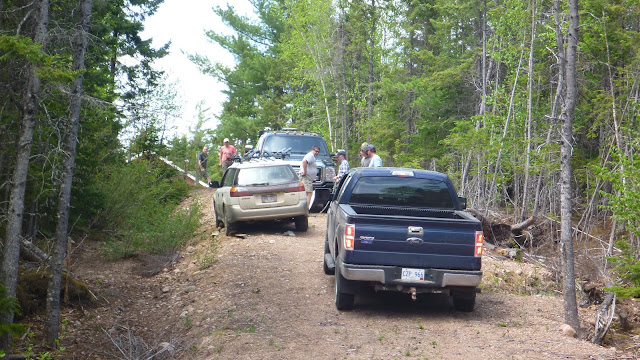 All is well that ends well. We had a great chuckle at all the mishaps and decided we were a great team. We were glad for the experience of taking on the river... but next time, the water will be higher, Dean will have a better boat, a better shoulder and better longjohns... and Hazen will only be permitted in the passenger seats.
Thanks guys for an awesome trip!!